This blog post is not about SubstrateVM nor GraalVM but focuses on the jaotc AOT compiler in HotSpot.

In this blog post, we are going to focus on the Ahead-Of-Time (AOT) Compilation that was introduced in Java 9 (https://openjdk.java.net/jeps/295) with the addition of the jaotc command-line utility. This AOT compiler is based on the work done in Graal JIT.

We are going to explore some of the tradeoffs that the AOT compiler needs to take, and how the generated code fits in the Tiered Compilation (TC) pipeline. Then, we will go through a simple example, showing how to use the jaotc command-line utility. Finally, we are going to explore some alternatives to the AOT compiler like JIT at Startup, JIT caching, and Distributed JIT.

An AOT compiler’s primary capability is to generate machine code for an application without having to run the application, allowing a future run of the application to pick the generated code. Similarly, to C1 and C2, jaotc compiles Java bytecode to native code.

The primary motivator behind using AOT in Java is to bypass the interpreter. It is generally faster for the machine to execute machine code than it is to execute the code via the bytecode interpreter. In many cases, it is a definite advantage, especially for code that needs to be executed even just a few times.

For example, AOT compilers are required to generate Position Independent Code (PIC) to produce shared libraries. That is because there is no way to know ahead of execution where in memory the code is loaded, blocking any assumption the AOT compiler can make on the location (relative or absolute) of a symbol; this prevents the AOT compiler from referencing the address of any symbol directly. So, whenever a symbol (such as functions and constants) is accessed, it requires the AOT compiler to generate an indirection, with the resolution happening on first access to the symbol.

Integration with the Tiered Compilation pipeline

Introduced in Java 7, Tiered Compilation (TC) goal is to have fast startup time and fast steady-state throughput. The implementation consists of a pipeline of multiple tiers of code generation. The three main components of this pipeline are the interpreter, the C1 compiler, and the C2 compiler. It replaced the -client and -server command-line parameters available in previous versions of Java.

As the method goes through the different tiers, each tier gathers information about the method execution. This information is called Profiling Data (PD). The C2 compiler uses this PD to make certain assumptions such as what code paths are cold/warm/hot, and what types are used at any call sites. It can then generate code better suited for the specific context that it is currently executing in.

The five tiers of code generation are:

With jaotc, you have the option to generate code with or without support for TC. Enabling TC generates slightly slower code due to the profiling overhead. Disabling TC blocks the use of the TC pipeline leading to slower steady-state throughput.

Figure 1 and Figure 2 show the flow in the TC pipeline if you use AOT or not. 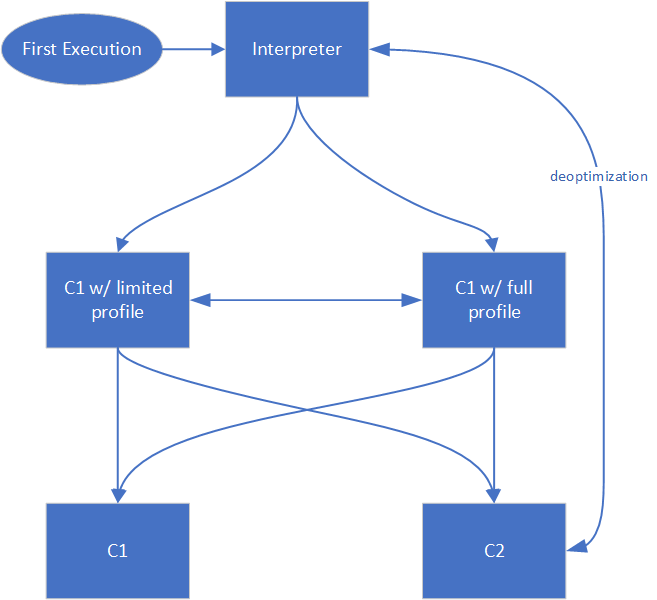 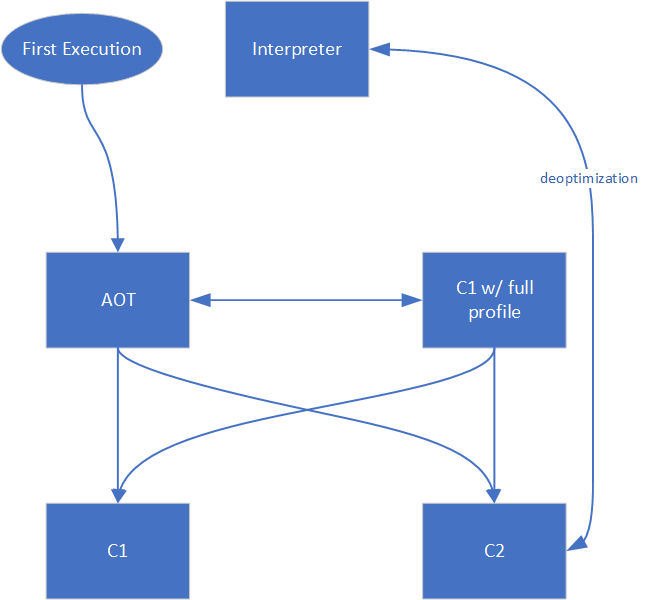 In case the code has been generated with support for TC, AOT code fits in the TC pipeline at roughly the same tier as the limited profile (2) tier. The threshold value differs, with, for example, the execution threshold to go from Tier 0 or Tier 2 to Tier 3: the default value without AOT is Tier3InvocationThreshold=200, and the default value with AOT is Tier3AOTInvocationThreshold=10000.

For the AOT compiler to successfully generate code, the same environment than for the JIT compiler need to be available. That means that all dependencies (jars, jmods) must be present and accessible to the AOT compiler.

The example below is assuming you are using Java 11 or later.

To compile it to Java bytecode, run the usual:

If you want to run without AOT, you simply run:

If you want to run with AOT, you first need to run the AOT compiler:

Then to reference the code generated by the AOT compiler, run:

To verify if the AOT compiled code is loaded and executed, run the above command with -XX:+PrintAOT and you should observe the following output:

You can observe the output of -XX:PrintAOT in the first three lines. Line 1 signals that ./libHelloWorld.so was correctly loaded. Lines 2 and 3 signal that the constructor HelloWorld.<init>() and the main method HelloWorld.main() were loaded and used for this execution of the application.

Other approaches to code generation apart from AOT are in development in Java. Similarly, to AOT, some of them focus on startup throughput (JIT at Startup and JIT Caching), while others focus on compilation footprint (JIT out of Process).

At startup, before the Java main() method executes, the JVM compiles a predefined set of methods. The C2 compiler is used to compile these methods and, because both the generation and the execution of the code happen in the same process, the C2 compiler doesn’t require any modifications. PD is available alongside the predefined set of methods and is used to generate better code.

The procedure to determine the predefined set of methods is simple: previous runs gather this information, both by saving the compiled methods and the PD used to compile these methods.

This approach answers a very particular need: guaranteeing a high throughput from the get-go, at the expense of startup time.

This method requires persistent storage between runs of the application. It does require the same dependencies and environment between runs. Otherwise, you cannot always guarantee that the code generated on a previous run is compatible with the current one.

This method assumes that offloading the code generation to another process on another machine has a smaller footprint than generating the code in-process. It works particularly well in constrained environments (for example, less than 512 MB of RAM and half of a CPU core) where you can off-load the code generation to bigger machines, freeing precious resources for the application. Moreover, it allows for system-level optimizations by allowing better caching of the generated code across many runs of the same application (ex: running Hadoop across dozens, hundreds of machines).

The overall goal is not to reduce startup time or improve startup throughput – like AOT compilation, JIT at Startup, or JIT Caching – but to reduce the impact of the JIT compiler on the application footprint. That makes it a great complement to these other methods.

An implementation is OpenJ9 JITaaS.

In this blog post, we explored tradeoffs in the code generated by the AOT compiler (like Position Independent Code), and how the code fits in the TC pipeline. We also looked at other solutions in the Java ecosystem like JIT at Startup, JIT Caching and Distributed JIT, and how these solutions fit in the larger code generation aspect of the JVM.

In a future post, we’ll dig deeper into the implementation of jaotc and how the code is loaded and used by HotSpot.